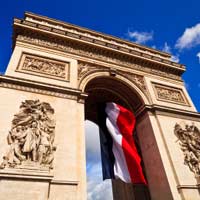 Is the French bureaucracy cliché true? In a word, OUI! Of course, the fact that bureaucracy is a French word might be something of a giveaway, too!

There is no escaping the fact that the French Love A Form, a procedure, and a place for everything and everything in its place. They are also fond of obtaining a photocopy of every possible document you may ever need. It's as much a part of the culture as shrugging or indifference to English cheese.

In order to receive French Healthcare As An English National, you must pay the right type of tax to the right organisation. It is not like the UK, where residency in itself gives you healthcare rights (although as a short-term resident, the UK government will cover you for up to 12 months provided you have an E106).

Once you have received your Carte Vitale (the precious green credit card-sized key to the doctor's door), you can arrange for an appointment which (as in the UK) comes from your GP. This in practice constitutes a hand-written letter in flowery and courteous language which moves you on to the next stage. A hospital appointment!

Once you are at the hospital, you must obtain a 'l'etiquette'. This is a series of stickers containing your name, healthcare number date of birth and so on, which are required for the (yep, you guessed it!) dozens of forms that you will generate during your visit!

Starting a business in France is no small feat either. There are many more forms and taxes than the UK equivalent. It is a recurring theme among those trying to show an ounce of enterprise that it's almost as if they don't want you to flourish! Rather than registering with one agency as a sole trader and getting busy, the French want to test your mettle before you embark on a career in your chosen calling.

Car importation is another procedure that would have turned the late Mother Theresa into a violent criminal! At each step of the way, you need to procure the form which enables you to get the form you need so you can complete the form. It's a LONG process. It is not enough that the UK deemed the vehicle suitable, oh no! The French need proof!

Also be aware that an English birth certificate won't necessarily be enough either. A translated version will help quicken the pace of progress from snail like, to slightly faster snail like. And it must have every single note, letter and number translated or it will be deemed a fake.

It is also compulsory to keep your paper driver's licence with you when you are driving. You will also need a fluorescent waistcoat of the kind favoured by early nineties ravers. This is in case of a breakdown and is actually a rather good idea. You will also need a warning triangle, though these are all available in kits for relatively little. and can be bought in supermarkets in France and on cross-channel ferries.

In order not to upset the entente cordial, here are a few tips to help you prepare for your first foray into 'l'administration'.Don't think for a minute that anything will be done in one visit. This is not a trip to the Post Office. If you know where you need to go, then check the opening hours of the office and GET THERE EARLY! You will find that people are much more agreeable when they haven't yet had a day of rouge tape to wear them down.

Don't forget to check if there are any Saints Days you need to be aware of, as it could well save you a wasted journey. Offices also close for two hours at lunchtime, and often close early on Fridays and possibly do open at all on Mondays.

Try to find out what you will need to bring with you ahead of time. A cursory search of the Expat Forums may well yield you enough information to take the first few blows in your stride.

Try to remember that it is part and parcel of the culture you are embracing. There is nothing more likely to isolate you as an ignorant Brit than to sigh or tut loudly as you make your way through the clerical jungle. If you are courteous with the person you are dealing with and try to use French wherever possible, you will often find that they can make the whole process a lot easier for you, and hurry things along with a friendly knowing wink.

How to Integrate Into a French Community