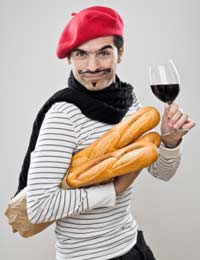 Are stereotypes about the French really true? Well, think of a typical French person and what do you see? A beret-wearing gentleman, parading his onions atop a rusty old bicycle? Perhaps an unshaven poet gesturing ostentatiously while a long extinguished Gitanne hangs from his bottom lip. Maybe it's an impossibly glamorous vision of couture and elegance, drifting through the crowded pavement cafés of Montmartre.

Well, they're all true! No seriously, they are. Well, perhaps apart from the onion seller...

However, there are many more ingredients in French soup! France has long been a multi-cultural country with a proud tradition of integration. You could just as easily paint a picture of a North African teenager, dressed in an Olympic Marseille football shirt, one leg of his tracksuit bottoms hitched up. You may find them hanging outside the burger bar while a soundtrack of French hip hop clatters out from his mobile phone.

Or could it be the elderly lady, walking slowly around the supermarket looking for a bargain. That unspecified internal organ in the meat section? That's for her. Don't be offended if she pushes her way in front of you in the queue... it is quite acceptable socially to do this if you are of a certain age, are visibly pregnant or have a disability. The French won't bat an eyelid.

Perhaps it is the silver-haired biker with the regulation sideburns and cowboy boots. Riding his gleaming Harley Davison to the supermarket car park. Airbrushed wolves on the petrol tank, a pack of cigarettes in his shirt pocket (he will NOT be giving up his wicked weed just because the government says so!), and reliving his youth to a Johnny Hallyday soundtrack. Leave him be madam, he will be out of town by sun up.

Or maybe it is the middle aged woman who serves you at the boulangerie. A scarf tied jauntily around her neck, twinkly eyes that smile for her every customer and a figure which says, “I only indulge sometimes”. She will send you on your way with enough calories to apply for a mobility scooter. And well she may smile, for she knows you will return tomorrow!

Then again, maybe even you won't realise they are French at all. There was a time when you could spot a French teenager a mile away due, in no small part, to their loudly-coloured back pack and red jeans.

Nowadays, a French youth is virtually indistinguishable from his or her UK counterpart. Skinny jeans and a cardigan? Check. Eyeliner and bright lipstick? Check. Unwashed and wearing a crusty old Metallica t-shirt that they found in their Dad's wardrobe? You betcha!

Go into any Apple store and see the identikit hipsters with their facial hair and oversized horn rimmed glasses. Yes, the French too aspire to live a life of youth and beauty via sexy, silver devices.

Refreshingly, there is a somewhat different attitude towards those following a more 'alternative' lifestyle. The 'dogs on a string' types who strike fear into the hearts of many a middle class do-gooder in the UK are generally treated with respect in France and don't cause a lot of fuss. Let us not forget that elitism and privilege were overthrown in France a long time ago (well in theory anyway!). You will see these types outside supermarkets and Post Offices asking for change and yes, they will use it to buy booze, but there is a good chance that it will be red wine and it will accompany some cheese and a baguette!

One thing that most French people have in common is that if you speak loudly at them in English they will treat you like the fool that you are. French people are by and large a pretty friendly bunch. One wonders what type of person finds them any other way. Parisian life may be faster paced and the average inhabitant will likely be less than concerned about catering to your every whim, but isn't that true of any city?

The French do like to enjoy life though. This is why so many of us spend our holidays there (France is STILL the most visited country in the world with between 75 and 80 million foreign visitors per year), and why so many of us either think of, or actually do emigrate. You may even find some new stereotypes of your own.Happy hunting!

How to Integrate Into a French Community