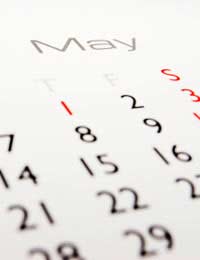 When you start your new life in France it is a good idea to have a French diary or calendar to hand because there are a number of ‘fetes’, or what in the UK would be called ‘bank holidays’. They often fall on a Thursday, which means that a number of French people will also take the Friday off work, giving them a long weekend, which is called ‘faire le pont’ in French, literally ‘to make the bridge’.

The first of May is an important day in France, perhaps more so in recent history than now, but it is certainly still a major date in the French calendar.

A Day to Celebrate the Workers

Fete du Travail, translated literally, means ‘Work Party’, but it really means ‘Workers Day’ or the equivalent of the US Labour Day.

It is a day to celebrate the workers of France and was traditionally a day which kicked off the parades and celebrations of the socialist parties and union members. Historically, the first of May was the day that set the stage for the major union activities of the spring and summer; marking and celebrating the successes and battles that union members and socialists had fought in years gone by. It is an important part of the French psyche to acknowledge and appreciate this struggle in order to live in freedom today.

This is still very much the feeling behind Fete de Travail and you will often see parades through towns and cities on the first of May, with the marchers proudly holding banners and flags. They are very rarely at all aggressive, although depending on the political and social feelings at the time, some more run down areas in large cities can use this date to show their ill feelings.

A Day for Family

For the majority of people that are not taking part in any marches, or giving a speech in the town square about socialist parties, Fete du Travail is a day to spend with your family. Although there is no particular food that is eaten on this day, many people like to enjoy local specialities, with fresh, seasonal ingredients.

It is the custom, however, for people to give their loved ones a bouquet, or posy, of lily of the valley flowers, called ‘la Muguet’; so much so that the day is sometimes referred to now as 'la Fete du Muguet’.

People often use the day off work to spend time in the gardens, especially as the first of May is usually a lovely, bright spring day. It is common to see people cutting their lawns and tending to trees and bushes that may have been neglected over the winter, getting them ready for the long, hot summer ahead.

Although most supermarkets and shops are closed, many bistros and restaurants are open on this day and it is a popular day for families to go out for lunch together. Seaside resorts are particularly popular, with families going for a walk along the beach before going into a local restaurant for 'lunch en famille' (lunch with the family).