Home > Case Studies > We Ran Out of Money Renovating Our Home: Case Study 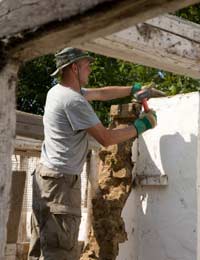 It is a sad fact that for every ‘Living the Dream’ success story about a family or couple moving to France, there is at least one where it just didn’t work out. And with the global economic crisis having a massive impact on the Sterling/Euro exchange rate, that number is going up and up.

We often hear in the news about British couples who Retire To France for a life of wine in the sun but whose drop in pension thanks to the Euro rate has made it untenable for them to live a good life. What is less common, however, are the tales of people struggling to Make A Living In France. You just have to look in the windows of French estate agents, or particularly read the expat email mailshots, to see how many people are desperate to sell the home that was once a dream come true, but they just can’t afford it anymore.

Dream Turned into a Nightmare

This is the unfortunate situation of Steve and Jo Linden, originally from Manchester, who bought an ‘expat classic’ house in the Dordogne.

“My wife and I decided to move to France about five years ago," Steve explained. "We’d sold our detached house in Manchester for a terrific profit, and as we run our own website design company, we knew we could work anywhere. We were really starting to feel like we’d had enough of living in the UK as the climate and the attitude were really getting us down, and as I’d recently lost my mum to cancer and Jo’s parents already lived in Spain, we felt there wasn’t much to keep us in Manchester.”

Steve and Jo bought a ramshackle old wine maker’s house which was in Need Of Renovation but had the potential to create a wonderful family home for the couple and their two young children, Sam and Izzy. "The kids weren’t yet at full-time school when we left, which we knew was a good time to move them, and we had plenty of money for the renovations from selling our home in Manchester, especially as at that time you got €1.45 for every pound – even on a bad day!” said Steve.

The move started off brilliantly for the Linden family, with Steve and Jo working on one small area of the house first so there was at least a rudimentary kitchen, bathroom and two bedrooms. The couple’s web business was also going well, particularly as they were able to pick up quite a few clients from their new region.

“There seemed like more English-speaking people than French in the Dordogne – it’s no wonder it gets called Dordogneshire!" said Steve. "Loads of people seemed to be just like us, having made quite a bit of money selling a house in the UK and then buying somewhere to do up in villages and towns nearby. There was a friendly atmosphere and we quickly made friends and made websites for people with all sorts of businesses.”

The Impact of the Recession

Although this continued for a few years, when the recession hit practically overnight, Steve and Jo found that the picture wasn’t looking quite so rosy.

“It sounds so naïve now, but we thought it would all continue the same," Jo explained. "We’d been using some of our money to do up the house, but we’d been having such a good time meeting new friends that we’d spent quite a lot of the money on just doing a couple of rooms really perfectly, and we’d bought lovely traditional French iron furniture which cost us a fortune. We also had to install a brand new septic tank, which was not a cost we expected, and the bills for heating and electric were loads more than we budgeted for.”

But the real issue was the fact that the couple thought their good fortune would just keep going, as did many of their friends.

“We had fixed the septic tank and got the bedrooms finished, and were just starting to think about fitting a decent kitchen to replace our make-do one, when the Euro rate literally dropped through the floor to about one Euro to a pound," said Steve. "It also meant that our web business dried up really quickly and it hit us how much money we’d basically been wasting on enjoying life. We struggled on for a few months, but we could see that we just couldn’t afford to continue as we were."

"We’re now in the position of not having a finished house that we can sell but also not really being able to afford to stay. We’ve got the house on the market in the hope that someone wants something to do up, but no Brits are moving out here at the moment and there are loads of places like ours for sale. We’re just trying to be positive and hope the market picks up.”